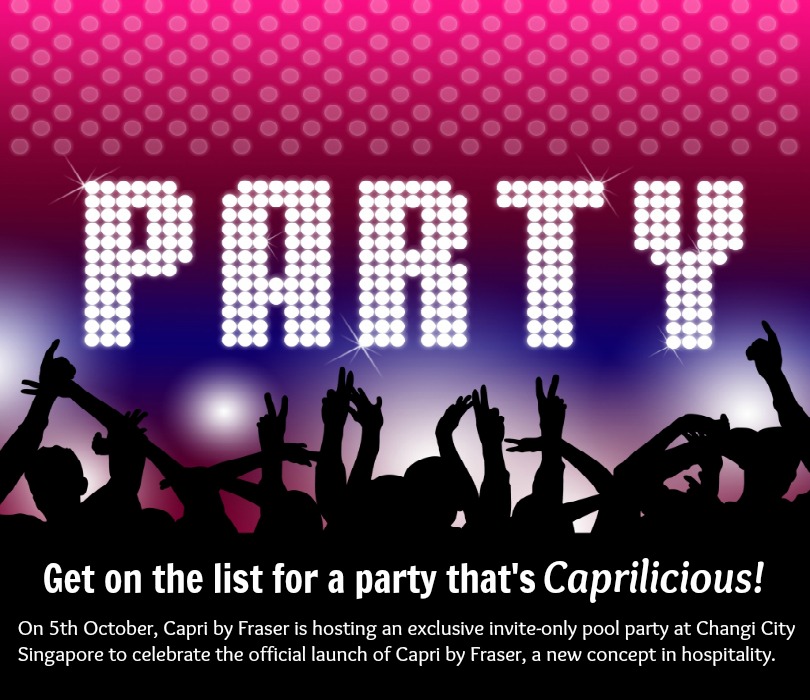 Frasers Hospitality has launched its third brand “Capri by Fraser”, with the opening of the 313-suite Changi City/ Singapore at Changi Business Park. Designed to meet the lifestyle needs of the digital generation, Capri by Fraser cuts through the conformity of typical hotels by offering residents an extensive range of facilities and customization services together with the comfort and convenience of a full serviced residence.

On October 5 2012, Capri by Fraser is hosting an exclusive invite only pool party at Changi City Singapore to celebrate our official launch and we want you to come!

Watch performances by DJ Koflow, and as well as a live band featuring Robert Nalin, Christy Smith, Aya Sekin and Leonardo Mendoza! Be blown away by our tasty cocktails such as Berry N Rose, Cinnful, Seraph Cup, La Terra Elixir, etc. concocted by our guest mixologists!

Lucky party goers stand to win the following prizes on the night itself,

Voted as the “Best Turntablist 2010 and in 2011”, hailed as the ‘Grandmaster of Flash’ in 2009 and voted best DJ 2008 by Juice magazine, Singapore’s DMC champion 2003 and Thirst Champion 2005 (with many more awards and accolades to his name). Recently in 2012, he is also included as one of the musicians whom had made a difference in Singapore’s music landscape in the past 10 years by the Esplanade Singapore as they paid tribute to the individuals.

Breaking the conﬁnes of turntablism that has taken him far beyond our shores, He has wowed audience and shared the stage with international artistes that include Nas, Missy Elliot, The Black Eyed Peas, Akon and Kanye West, just to name a few. He also brought his music revolution to numerous festivals such as MTV Pattaya music festival, Battle of the year, RedBull BCone, F1 Racing post parties, Siloso Beach Party as well as The Asian Hip Hop Festival in Bangkok.

Robert Nalin is the drummer well known as the “groove master” for his balance of technical precision with innovative and stylized grooves. Inspired as a child by the rhythms of the Indian Temples, it was natural for Robert to progress from a young age to become one of the most widely recognized & inspirational drummers in Asia.

Christy Smith is a phenomenally versatile bassist from California USA who is as comfortable on electric bass as he is on the upright, and as happy to be playing hard-nosed funk grooves as he is to be improvising over complex contemporary jazz progressions and meters.

Born into a family of musicians, Leo has been playing the saxophone and ethnic wind instruments for as long as he can remember. He has performed and recorded with various musicians and singers, including extraordinaires like Michael Stanton, Christy Smith, Mohammed Noor, Richard Jackson, Denise Menningfield, Casey Subramaniam, JJ Lin, Jeremy Tordjman and Alemay Fernandez.

Aya graduated from Berklee College in 1994, during which time she was introduced to jazz and especially Bebop. Upon graduation she moved to the music capital of the world, New York City where she was exposed to every sort of music from Brazilian to freestyle and experimental improvisation. After spending nine years in New York City, she returned to Singapore where she became resident pianist at Jazz@Southbridge.

How to find us